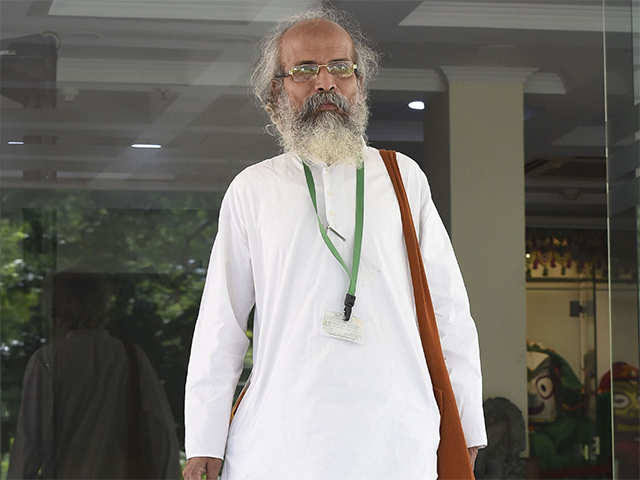 Since many years, we are planting misconception seed in our mind is that the criteria for winning the election is on the basis of money and power. But the one guy who proved everyone’s thought wrong and he is one and only Pratap Chandra Sarangi. He shows how anyone can live in simplicity after getting everything. Let’s talk about his salad days,education, lifestyle and political carrier.

He was born on 4 January,1955 in the village of Gopinathpur, Nilagir, Balasore. He was interested in sprituality since childhood. He understood the meaning & facts of sprituality very well which we can see that his thoughts perception & simplicity of life in today’s time. In 1975, he completed his Bachelor’s degree from Fakir Mohan College,Balasore under Utakl university. He had decided to become a monk in his childhood. But God’s will was something else. He visited several times to Belur Math in Howrah,West Bengal for become monk. One day the monks and the guru of the math listen the story of his life and desires. After knowing everthing, they decided that  they should be sent back him to serve his widowed mother. Well this is also a part of spirituality. So after that when he came back to the village. He turned his life into various social activities. He has opened many  Ekal Vidyalayas(village school with single school teacher) till class 3 or 5 for education of poor children under the Gana Shikhsa Mandir Yojna.After doing so many social activities,

He was appointed as Chief of Bajrang Dal in Odisha. He fondly called as ‘Nana’ and revered like an older brother. More Damingly, In 1999  when Australian missionary Graham Staines and his two sons were burnt alive by a group of men with links to the Bajrang Dal. But after special investigation no one crop up for this incident with link to the Bajrang Dal especially Nana. He also condemned the killing.  When Nana was a state persident of Bajrang Dal in 2002, he was arrested by Odisha police on charges of rioting, arson, assault and damaging government property. Leaving behind these difficulties, From 2004 to 2009 & from 2009 to 2014,He had been consecutively elected as Member of Odisha Legislative Assembly,both times from Nilagiri constitution & Saffron Party(BJP). In 2009, unfortunately he lost the party ticket. When he got party ticket from office, he had kept on the some bag and used public transport for travel & had lost his party ticket. As i said his presence of mind is too different. He filled nomination deatails as an independent candidate & even won the election. It shows how much ability he have to serve the country. If any MLA is formed in India then as if the lottery has taken place in their house. But Nana is the one who spending the maximum part of his pension and agricultural earning to support the poor people, the education of children,developing the village and many more activities. His simplicity of living life is incredible. He lives in the hut with his mother. Despite being an MLA, he plays many games with the village of children.

His mother was passed out in 2018. Unluckly, in 2014 he lost Lok Sabha Election from Balasore,Odisha. He didn’t give up. Nana determined that he will slap on the face of those people who think election is all about money and power game. That time came when he completly spread everwhere whether the social media or news media. In 2019 from Balasore, Lok Sabha Election he defeated the richest BJD candidate sitting MP,Rabindra Kumar Jena by a margin of 12,956 votes. Nana campaigning was also markedly different.  He used to go with bi-cycle rides for campaign. But in this election, he used atleast auto-rikshaw for campaign. Now he is a part of Modi 2.0 cabinet. A bachelor, Sarangi took oath on Thursday as Minister of State in the Modi government.

Everyone can see the glimpse of his simplicity in the campaign. Elections in countries like India he shows his simplicity to serve a country which is so remarkable.The 64-year-old wears a simple white kurta and pyjama.In current interview he told to the Reporter directly with the gut that he came to Delhi to debate on the floor of the house👏👏. The reporter asked to Sarangi that he would change his lifestyle now that he is a minister. Sarangi said My lifestyle has been like this since childhood. It is not going to change with power. I believe in meeting the basic needs of life and working for the people and the country.” His total assest tends between 5 Lakhs to 13 Lakhs which i don’t know exactly. Now people called him as The Odisha’s Modi. In today’s period, The humanity he served among the people is appreciable. I think that In life, we do not become what we want, but in the context of what we think we become something like this. The story of this man motivate everyone and tell the life become so easy when you have planted right seed in your mind.